Pallini. A tradition of quality since 1875

Pallini is one of Rome’s oldest and most important companies in the drink industry. The company is mostly known in Italy for the Pallini Limoncello made with the delicious Sfusato lemons from Amalfi Coast. Among all its products, Mistrà, a dry anise liqueur, soon became known as an unbeatable way to “lace” espresso coffee.

Pallini exports its product in over 35 countries worldwide and it is leader with its Limoncello Pallini in the Duty Free segment and in the US market. Pallini produces also Sambuca 313, a wide range of liqueurs for professional and domestic pastry cooking, and imports a vast assortments of specialty products from all over the world. Pallini is known worldwide for its high quality premium liqueurs. 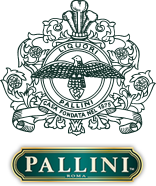 Pallini’s remarkable story begins in 1875 in Antrodoco, a small village in the center of Italy.  Its founder Nicola Pallini was born in Civitella del Tronto, Abruzzo, in a humble household of shepherds and farmers.

From a very young age Nicola showed great interest in entrepreneurship and at the age of 15 he began his career as an itinerant merchant, working in the markets of the Marche and Abruzzi areas, selling fabrics and chestnuts. Thanks to his bright mind and eagerness of personal growth, he learns to read, a luxury only a few people could afford at the time. When Nicola turned 20 he became a successful merchant, and decided to move to Antrodoco, a small town on the border between Lazio and Abruzzo. Antrodoco was well connected to the railway network which grants him the possibility to expand his trade with other areas of Italy.

In 1875 two wonderful things happened: Nicola married Concetta Egidi and founded Antica Casa Pallini, a prestigious commercial space where varied items were sold: seeds, fine fabrics and liqueurs produced by Nicola and his family, using his family’s ancient recipes. These were the first steps Pallini started to take in order to become the renowned company it is today. Antica Casa Pallini kept on expanding during the years, becoming very well known throughout the province.

After a few years, Virgilio and Fidelfo, Nicola’s sons, join the family business and helped him run the company. Virgilio took over the wine and liquor production, distribution and sale with other grocery and pharmacy items. Fidelfo took care of the textile share of the family’s business.

It was Virgilio’s desire for growth and expansion for Pallini that in 1922 the company was transferred to Rome.

Together with his father Nicola, his ability and experience in business that the distillery opens its doors. And the production of various products began, such as Mistrà, an anise based liquor which quickly became a household brand  and the only way to “correct a coffee” or corretto (as it is called in Italy), which is a popular way to drink espresso by adding a few drops of this exquisite liquor for “that extra something”.

Over the years Pallini continued to grow and prosper, as the brand became a symbol of high quality and excellence in the production of anise based liqueurs.

In 1933, 58 years after Nicola Pallini founded Pallini, his grandchildren Nicola jr and Giorgio joined the company as the third generation of Pallini members guiding and managing the company.

Fast forward to 1962 during Italy’s economic growth, Pallini kept the pace and moved from Rome’s center to Via TIburtina, an industrial area in Rome’s outskirts. In 1964 the company obtained the exclusive production of SAMBUCA ROMANA, a new and promising anise flavored liquor and began exporting it to the United States. Thanks to Virgilio Pallini jr’s experience as a television journalist before joining the company as chief of export sales, Pallini’s exportation numbers grew vastly and Romana Sambuca soon became worldwide famous and recognised everywhere due to its unique and exquisite flavor.

It was during the 90s after becoming a consolidated liquor company, Pallini redesigns the packaging from one of its superb products: the limoncello, made with the original recipe from Giorgio Pallini’s wife Signora Casella: her family’s ancient recipe that enclosed limoncello’s exquisite secrets.

Limoncello Pallini holds the rich citric perfume of the Amalfi Coast lemons, cultivated and harvested by hand, free of pesticides or fertilizers, respecting the old traditions. At the dawn of a new millennium Pallini continued its expansion, welcoming the fifth generation of Pallini members in the guidance and management of the company, such as Micaela Pallini, daughter of Virgilio Pallini jr.

In 2010 to celebrate Pallini’s 135th. Anniversary, Pallini presents Sambuca313, a new and exciting Sambuca formula, with its classic distillates of anise and notes of elderberry, cinnamon and cardamom. Packaged in a unique silk-screened bottle, it has won numerous international awards.

In 2012 Pallini Limoncello was awarded with the best Limoncello in the Netherlands by the national Dutch TV. Pallini also wins the prestigious Superior Taste Award 2012 awarded by the great chefs of the International Taste and Quality Institute in Brussels. Pallini Limoncello is listed at Eataly in New York, Chicago and Rome will follow shortly.

In the present day, another generation of Pallini is dedicated as ever to preserving the family tradition by bringing the freshest possible flavors to their products with a combination of high quality and just-picked ingredients, state of the art processes and precise attention to detail.